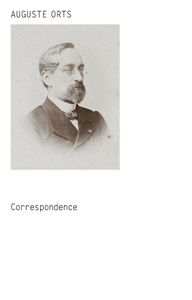 order
Catalogue of the first collective exhibition by Auguste Orts, which came about on the basis of the frequent letters the four members exchanged about their work and contains two installations by each artist.
Including an essay by T. J. Demos, an introduction by M HKA director Bart De Baere, a round table discussion between the curator Dieter Roelstraete and the artists, in-depth texts on and illustrations of each artist's work, and several letters exchanged between Roelstraete and the members.
“While comprised of the singular and at times divergent approaches of its members, the group's work shares ... a simultaneous commitment to ... the political potential of filmmaking (imagining experimental modes of life, contesting oppressive systems) and ... the subtle craftwork of aesthetics (the perceptual attentiveness to the specific nature of form and medium).”
T. J. Demos
Published on the occasion of the same-titled exhibition at M HKA, Antwerp (Summer 2010).
Auguste Orts is a production platform set up by the Brussels-based artists Herman Asselberghs, Sven Augustijnen, Manon de Boer, and Anouk De Clercq. Indentifying themselves as visual artists, they work primarily with film and video.
order
Edited by Dieter Roelstraete.
Texts by T. J. Demos, Bart De Baere, Dieter Roelstraete and the members of Auguste Orts.
published in September 2010
English edition
12,5 x 19,5 cm (softcover)
152 pages (21 b/w ill.)
12.00 €
ISBN : 978-1-934105-11-5
EAN : 9781934105115
in stock