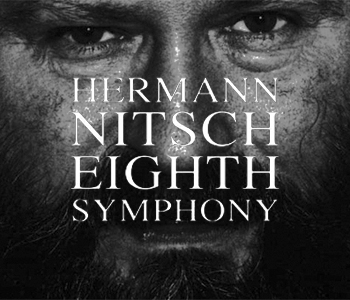 wishlist
Recordings of the first performance of Nitsch's 8th Symphony (for Choir, Orchestra, and Noise Orchestra). Performed June 25th 1990 at the MAK Museum für angewandte Kunst, Vienna.
Professionally recorded, extremely dramatic, dynamic, rich, full-blown orchestral music & noise, heavy drones, and austrian 'Volksmusik'.
Comes in big double-disc jewelcase, including 2 posters with credits, photos, a part of the score, and the text 'Die Gigantische Symphonie' by Günter Brus.
The music was previously released by the Cortical Foundation in 2001 as a 2LP-Set limited to a mere 185 copies. Remastered for this CD Edition from the original tapes. The artwork, photos & texts are exclusive to this edition.
One of the founding members of the Wiener Aktionismus (Viennese Actionism) art movement, Hermann Nitsch (1938-2022) was also one of the most prolific members of the group. Nitsch was particularly interested in expressionism and religious art, following his academic training. Noted as a master of Austrian performance, he has presented a total art with sensuality: limitless, Dionysian and demonic. His mastery of many media (visual arts, theater, music, etc.) expressed his system of values, at once spiritual, philosophic, aesthetic, and social, all taking part in his larger artwork.