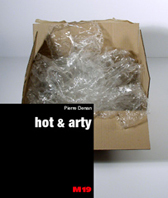 wishlist
Artist's book.
Compositions with borrowings, alterations, quotations as well as original propositions for a hot & arty atmosphere, functioning on a binary mode: container/contents, right/wrong side, even/odd, folded/unfolded, full/empty, associated/dissociated.
A pure formal game whose inspiring gesture – and signature of the omnipresent body – also chases it out of the representation, in an inverted mechanism.
Pierre Denan has founded M19 (May 19), a structure for the conception and publication of magazines, books, and other printed media intended for the dissemination of original artworks as well as critical texts. An artist and an writer, he is the editor of magazines such as MAP, 20/27, AH AH AH, Grams of art, as well as the artists' books series I.S. Inventaire Supplémentaire.
wishlist
no text
17 x 20 cm (softcover)
80 pages (color ill.)
sold out