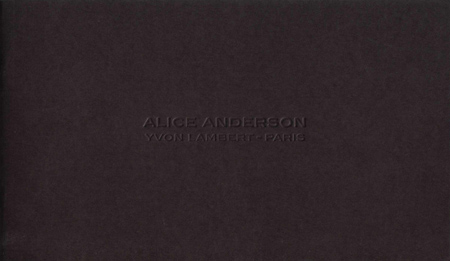 order
wishlist
This small book accompanies the video Belles Rives (2001), with a selection of screen shots.
Published for the exhibition Alice Anderson at Yvon Lambert Gallery from December 2001 to January 2002.
Born 1976, Alice Anderson is a Franco-British sculptor and video artist known in particular for her objects and structures wrapped in copper wire, wrappings that give rise to dazzling or meditative performances. Her work resonates with ancestral cultures—such as that of the Kogi Indians—and transhumanist thought, which aims to increase human capacities through technology. Alice Anderson was nominated for the Marcel Duchamp Prize in 2020. Her work is exhibited internationally and some of her works have entered public collections such as the Centre Pompidou in Paris.
order wishlist
published in 2002
20,5 x 12 cm (softcover)
32 pages
8.00 €
ISBN : 978-2-913893-30-6
EAN : 9782913893306
in stock
(last copies available!)