Haroldo Eurico Browne de Campos (1929-2003) is, with his brother Augusto, one of the founders of the concrete poetry movement in Brazil. 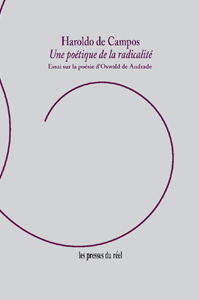 Une poétique de la radicalité – Essai sur la poésie d'Oswald de Andrade
2010
French edition
Les presses du réel – Avant-gardes – L'écart absolu (Absolute Gap) – Paperback
The militant essay by poet, theoretician, critic and translator Haroldo de Campos on one of the most radical members of the Brazilian avant-gardes of the 1920's: a key contribution to the critical rehabilitation of a work that has strongly influenced Concrete Poetry in Brazil, as well as many poetical adventures of Western modernity.