The drawings, sculptures, music experiments, and videos of the Icelandic artist Gabriela Fridriksdottir (*1971) create a microcosm with surreal qualities, which is peopled by hybrid and sexually charged creatures who can be read as metaphors for melancholy and excess.
Fridriksdottir's video work is distinguished by a fanciful narrative structure, which draws heavily on Norse myths and is notable for its break with rational logic. Her fields of activity, which can be defined in terms of a scientific curiosity in the irrational and mysterious, are reflected at a material level in her sculptures. Her distinctive joy in experimenting with ephemeral materials leans toward on the one hand, the tradition of Dieter Roth who has exercised a great influence on art production in Iceland, and on the other, her mystical interests. Thus, unusual materials such as mud, hay, and bread dough feature in her works alongside more conventional ones such as fur, plaster, and found pieces of wood. 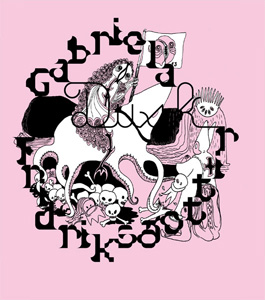