Florence Lazar (born in 1966 in Paris) is a French artist, videographer, film director, and photographer. She has exhibited at the Musée d'Art Moderne de la Ville de Paris (2010). Over the past decade, her work has since been featured in a number of documentary film festivals, including the FID Marseille, the Cinéma du Réel in Paris, and the International Women Film Festival in Barcelona. She was awarded the Prix Qualité by the Centre National du Cinéma for her film Les Bosquets (2012) and first prize in the French Competition for her film Kamen (Les Pierres) at the Cinéma du Réel festival (2014). Her work is represented in numerous public collections in France, including the Musée de Grenoble, the Centre National des Arts Plastiques (CNAP), the Musée d'Art Moderne de la Ville de Paris, and the Musée National d'Art Moderne/Centre National d'Art et de Culture Georges Pompidou in Paris. 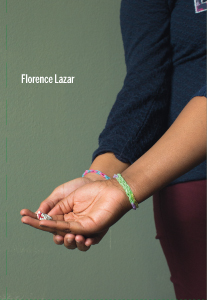 You Think The Earth Is A Dead Thing… It's So Much More Convenient! Dead, We Thus Trample On It…
2019
bilingual edition (English / French)
Jeu de Paume - Monographs
This catalogue accompanies the exhibition by Florence Lazar at the Jeu de Paume. It is also her first monograph.