Technologies, and in particular the Internet, are an important source of reflection for Gregory Chatonsky (born 1971 in Paris, lives and works in Paris and Montreal). Shaping the paradoxes of the network and the discrepancies between its technological and existential dimensions could summarize a research that unfolds on several mediums: installation, video, photography, writing, drawing and sculpture.
His works could evoke infinite spaces in which the fragmentation of attention reigns. The network becomes a world in itself where the boundaries between technology and the human being become blurred. His practice attempts to draw the outlines of a new imaginary whose invention would be technical.
Grégory Chatonsky has participated in numerous solo and group exhibitions in France, Canada and abroad, including “Imprimer le monde” in 2017, at the Centre Pompidou, “Capture : Submersion” in 2016, at Arts Santa Mònica Barcelona, “Walkers: hollywood afterlives in art” in 2015, Museum of the Moving Image in New York, “Telofossils” in 2013, at the Museum of Contemporary Art in Taipei, “Erreur d'impression” in 2012, at the Jeu de Paume.
In 1994 he founded Incident.net, one of the first netart collectives. He has taught at Le Fresnoy (2004-2005), at UQAM (2007-2014) and is an artist-researcher at the École Normale Supérieure de Paris. 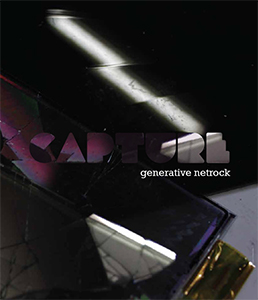 Capture – Generative Netrock
2014
French edition
CDA (Centre des Arts)
Capture is such a productive fictitious rock band, that nobody can consume everything. It produces new music, words, images, videos and derived products every hour. Capture reverses the consumerism ideology and the relation between desire and objects. This publication documents the project.