Rä di Martino (born 1975 in Rome, lives and works in Italy) studied at the Chelsea College of Arts and the Slade School of Fine Art in London before moving to live in New York between 2005 and 2010. Her film, video installations and photos have been shown in many institutions such as the Tate Modern, London; MoMA PS1, New York; Palazzo Grassi, Venice; GAM and Fondazione Sandretto Re Rebaudengo in Turin; MACRO and MAXXI in Rome; Museion, Bolzano; MCA, Chicago; MALI, Lima; Bronx Museum and Artists Space in New York; Kunsthalle Athena, Athens; Le Magasin, Grenoble; HangarBicocca and PAC in Milan. She has featured at Manifesta 7, at the Busan Biennale and the Turin Triennial, and has participated in many international film festivals including the Locarno Film Festival, KunstFilmBiennale, Viper Basel, Transmediale.04, New York Underground Film Festival, Kasseler Dokfest, Impakt Festival and the Turin Film Festival, and took part in the Venice International Film Festival, winning the SIAE Award in 2014, the Gillo Pontecorvo award and a Nastro d'Argento for best docufilm 2015. 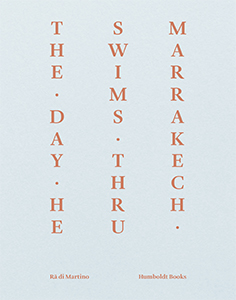 The Day He Swims Thru Marrakech
2016
bilingual edition (English / Italian)
Humboldt Books - Artist's Travels
Photographic companion book to the film La controfigura (“The stand-in”) by Rä di Martino: the tale of a cinema troupe in Marrakech trying to shoot the remake of The Swimmer, the 1968 film with Burt Lancaster, based on a short story of the same name by John Cheever.