Jonas Hassen Khemiri (*1978) is one of the last decade's most acclaimed Swedish writers. His work has been translated into numerous languages including French, German, Dutch, and English. Through the novels "One Eye Red" (2003)—which has also been made into a film and a stage play—and "Montecore: The Silence of the Tiger" (2006), as well as several plays and short stories, he has distinguished himself as one of the most important writers of his generation. 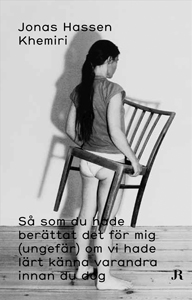