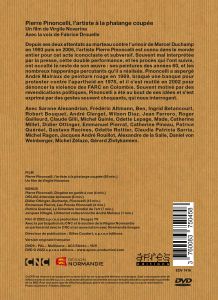 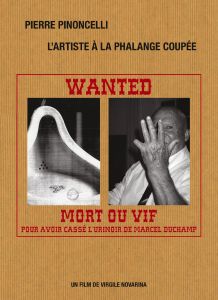 order
wishlist
A documentary film made over 10 years by Virgile Novarina, portraying the iconoclastic artist Pierre Pinoncelli, known since the 1960s for his shocking happenings.
With Sarane Alexandrian, Frédéric Altmann, Ben, Ingrid Betancourt, Robert Bouquet, André Clerget, Wilson Diaz, Jean Ferrero, Roger Gailleurd, Claude Gilli, Michel Guinle, Odette Lepage, Made, Catherine Millet, Didier Ottinger, Emmanuel Pierrat, Catherine Pineau, Patrice Quéréel, Gustavo Racines, Odette Rottier, Claudia Patricia Sarria, Michel Ragon, Jacques André Rouillot, Alexandre de la Salle, Daniel von Weinberger, Michel Zélazo, Gérard Zlotykamien.
Following his studies in Mathematics and Physics, Virgile Novarina (born 1976) devoted his work to the artistic exploration of his own sleep in the form of writing and drawings, and to the sleep of others in the form of photos and videos. Novarina has published eight books of Night Writings and Drawings and has exhibited his work in France, Germany, Portugal, Spain, Poland and the United States. Since 2006, the simple act of sleeping has become an integral part of his work, in performances entitled “En somme”, during which he sleeps in public in the display windows of stores, galleries and museums.
Since his two hammer attacks on Marcel Duchamp's Fountain urinal in 1993 and 2006, French artist Pierre Pinoncelli (1929-2021) has been known the world over for this iconoclastic and subversive act. This resounding artistic attack obscured the rest of his career in the eyes of the public. Stopping painting in 1966 to devote himself to happenings, Pinoncelli has never ceased to denounce the contradictions of our society. Pinoncelli is the man who sprayed André Malraux with red paint in 1969, who robbed a bank to protest against apartheid in 1975, who publicly mutilated himself in Colombia to free Ingrid Bétancourt and denounce the violence of the FARCS in 2002. Often motivated by political demands, Pinoncelli went to the end of his ideas and expressed himself by often shocking gestures, which question us.
order wishlist
Edited by Gilles Coudert.
Film directed by Virgile Novarina.
published in June 2022
French edition
DVD Digipack (DVD9 – PAL – MULTIZONE – AC3 Stereo – 16/9)
85'
20.00 €
EAN : 3760083750458
in stock
view video sample
https://vimeo.com/691379563