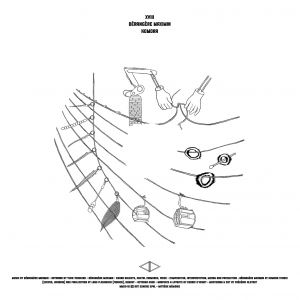 order
wishlist
Building on the ground of many of the historic French electroacoustic pioneers connected to studios like Groupe de Recherches Musicales (GRM), while moving into new realms, this electroacoustic composition of sprawling scope weaves a free-standing world of texture and sublimated tonality to produce ambient expanses comprising pointillistic detail drawing on unplaceable generative sources.
This record is part of the MMXX Series. In anticipation of the year 2020, Matière Mémoire asked 20 experimental/electronic artists to create an original 20 minutes piece and an artwork. Each record is limited to 500 copies and comes as a crystal clear vinyl featuring an original track of 20 minutes on one side, and a laser engraved artwork on the other. Each 12" is housed in a transparent sleeve printed with the MMXX logo, coming with a print of the artist artwork.

Working out of her private studio since 2008, Bérangère Maximin (born 1976 on the island of La Réunion) has developed her own approach to sound art and electronic music, composing dense, immersive pieces with immediate impact. On a series albums which have aroused international interest (released on John Zorn's Tzadik, Sub Rosa, Crammed Discs/Made To Measure and Atlas Realisations), she has revealed a taste for mixing disparate sounds together with a sense of detail, effusive, lyrical playings with the digital material and tight nuanced writing. Bérangère Maximin's music engages the listener in consideration of space and textures. The sound ambivalence and its independence from its original source being at the centre of her work.
order wishlist
published in June 2021
clear vinyl with etched B-side
25.00 €
in stock