MMXX-17 – Before it gets better, it will get worse (vinyl EP) 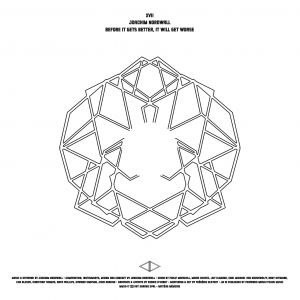 order
wishlist
Joachim Nordwall proposes for his contribution to the MMXX series a singular gesture built around captured vocalizations: the work's title, spoken by a number of voices, stands as doubling mantra and raw material, increasingly repeated layered, processed, and fed with further tonal and textural interventions over its duration, allowing Nordwall to push the boundaries of his own practice, between musique concrète, sound-art, and experimental electroacoustic music.
This record is part of the MMXX Series. In anticipation of the year 2020, Matière Mémoire asked 20 experimental/electronic artists to create an original 20 minutes piece and an artwork. Each record is limited to 500 copies and comes as a crystal clear vinyl featuring an original track of 20 minutes on one side, and a laser engraved artwork on the other. Each 12" is housed in a transparent sleeve printed with the MMXX logo, coming with a print of the artist artwork.

A major figure in the Swedish experimental music scene, Joachim Nordwall (born 1975) co-founded Borft Records and runs the iDEAL Organization including the iDEAL Festival in Göteborg and IDEAL Recordings since 1998. He has released his music on labels like Ash International and Hospital Productions and has been collaborating with artists like Aaron Dilloway, Mika Vainio, Mats Gustafsson, Leif Elggren, John Duncan, Gabi Losoncy, Mark Wastell and Christine Abdelour.
order wishlist
published in June 2021
clear vinyl with etched B-side
25.00 €
in stock