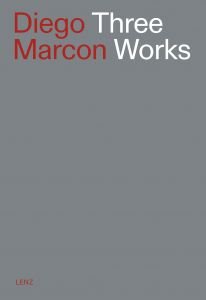 order
wishlist
This monograph deals with Diego Marcon's overall practice through the analysis of three works.
Monelle (2017), Ludwig (2018), and The Parents' Room (2020) are his most recent and complex projects, and while they do not constitute a trilogy, they are all emblematic of central aspects of his practice. In his own highly personal theory on passions, Marcon explores and reinvents archetypes taken from movie genres such as horror, slapstick comedy, and cartoons, creating characters and settings with undertones of the uncanny, the tender, and the ruthless.
His practice opens a path through various filmmaking techniques, ranging from the experimentation of structuralist cinema to the use of special effects and CGI. The human condition is reflected with a dry sense of pathos, expressed in particular by his attention to childhood as a moment in which purity and wickedness go hand in hand in the human being, spawning a potential metaphor endowed with profoundly ambiguous sentiments and experiences. Lastly, the sound dimension takes on a structural role, dictating the emotional timbre of each of these works.
However, each project remains a universe unto itself, and so each work is examined in a critical text by a different author (respectively Andréa Picard, Yann Chateigné-Tytelmann, and Eva Fabbris). The publication is illustrated in great detail with film frames and video stills, installation views, and images depicting the various working processes. The contents also feature an interview with Federico Chiari, sound designer and composer of the music scores, a "Letter from the Alps" and a complete index of all Marcon's works.
Diego Marcon (born 1985 in Busto Arsizio, Italy, lives and works in Paris) is a visual artist working mostly with film and video. His work is exhibited internationally (MADRE Museum, Naples, Bozar Centre for Fine Arts, Brussels; Museum Boijmans Van Beuningen, Rotterdam; FID Marseille, Marseille; Fondazione Prada, Milan; Institute of Contemporary Arts Singapore; La Triennale di Milano, Milan, MAXXI Museum, Rome; Centre international d'art et du paysage, Vassivière; Whitechapel Gallery, London; Fondation d'entreprise Ricard, Paris...). In 2018, Marcon won the Foundation Hernaux Sculpture Award and the MAXXI Bulgari Prize 2018. His films have been screened in film festival including the International Rotterdam Film Festival, Cinéma du Réel, Paris, Courtisane, Gent, BFI, London, and doclisboa, Lisbon.
order wishlist
Edited by Eva Fabbris.
Texts by Andréa Picard, Yann Chateigné-Tytelmann, Eva Fabbris, Andrea Viliani; conversation between Federico Chiari, Attilia Fattori Franchini, Marianna Vecellio. 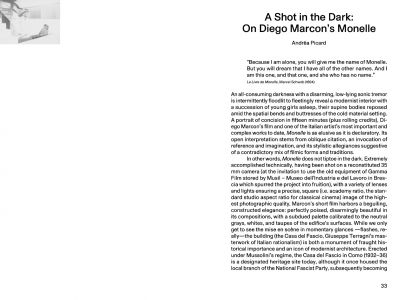 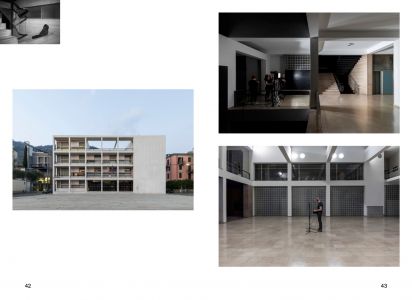 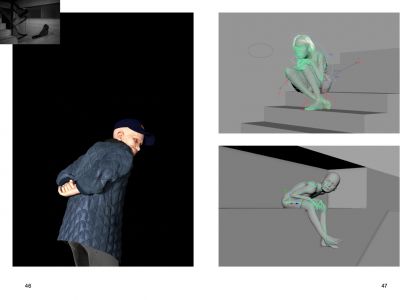 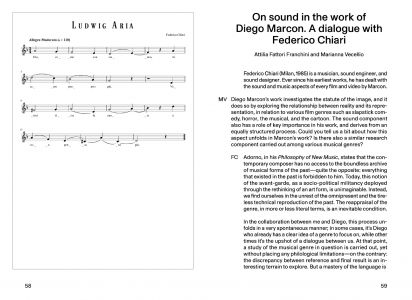