Natures of Data – A Discussion between Biology, History and Philosophy of Science and Art 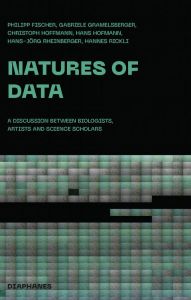 order
wishlist
A transdisciplinary discussion on the influence of computer-based technologies on the conditions of biological research.
Computer-based technologies for the production and analysis of data have been an integral part of biological research since the 1990s at the latest. This not only applies to genomics and its offshoots but also to less conspicuous subsections such as ecology. But little consideration has been given to how this has changed research practically. How and when do data become questionable? To what extent does the necessary infrastructure influence the research process? What status is given to software and algorithms in the production and analysis of data?
These questions were discussed for two days in September 2016 by the biologists Philipp Fischer and Hans Hofmann, the philosopher Gabriele Gramelsberger, the historian of science and biology Hans-Jörg Rheinberger, the science theorist Christoph Hoffmann, and the artist Hannes Rickli. The conditions of experimentation in the digital sphere are examined in four chapters—“Data,” “Software,” “Infrastructure,” and “in silico”—in which the different perspectives of the discussion partners complement one another. The aim is not to confirm one's own point of view, but through reciprocal interchange to gain a deepened understanding of the contemporary basis of biological research.
Philipp Fischer is head of the Center for Scientific Diving and the working group “Fishecology and In Situ Technology” at the Alfred Wegener Institute Helmholtz Centre for Polar and Marine Research, Helgpland and Professor for Marine Biology at the International Jacobs University at Bremen. His research focus is on fish behaviour, fish acoustic, underwater observatories and scientific diving.
Gabriele Gramelsberger is Professor for Theory of Science and Technology at the RWTH Aachen University. Her current research focus is on the digitalization of science and research as well as on the machine epistemology of artificial intelligence.
Christoph Hoffmann is Professor of Science Studies at the University of Lucerne. His current research focus is on data work in biology and the formation of epistemological concepts and values in academic training.
Hans Hofmann is Professor of Integrative Biology at The University of Texas at Austin. He is an evolutionary neuroscientist, who uses genomic approaches to uncover the neural and molecular underpinnings of social evolution.
Hans-Jörg Rheinberger studied philosophy, linguistics, and biology at the University of Tübingen and at the Free and the Technical University of Berlin. He worked as a researcher in molecular biology before he turned to the history of science. Between 1997 and 2014, he was director of the Max-Planck-Institute for the History of Science in Berlin.
Hannes Rickli is a visual artist. He teaches and researches as a Professor at the Zurich University of the Arts. His main focuses are the materiality of the digital, the instrumental use of media and space as well as media ecology.
order wishlist
published in February 2020
English edition
13,5 x 21 cm (softcover)
156 pages
25.00 €
ISBN : 978-3-0358-0224-5
EAN : 9783035802245
in stock