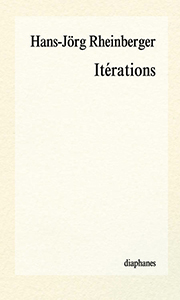 order
Six conferences on Franco-German epistemology—from Gaston Bachelard to Bruno Latour, Martin Heidegger, and Jacques Lacan—held by biologist Hans-Jörg Rheinberger from 1994 to 2007. The title pays homage to the thought of French philosopher Jacques Derrida.
Hans-Jörg Rheinberger studied philosophy, linguistics, and biology at the University of Tübingen and at the Free and the Technical University of Berlin. He worked as a researcher in molecular biology before he turned to the history of science. Between 1997 and 2014, he was director of the Max-Planck-Institute for the History of Science in Berlin.
order
Translated from the German by Arthur Lochmann (original title: Iterationen, Merve Verlag, 2005).
published in September 2013
French edition
12 x 20 cm (softcover)
160 pages
18.00 €
ISBN : 978-2-88928-010-0
EAN : 9782889280100
in stock