Music as Seismographic Sound – Tracking Down the Idea of Cultural Translation 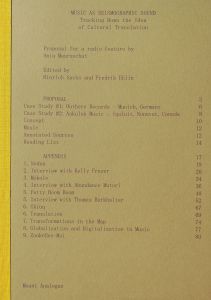 order
wishlist
A proposal for a radio project on the diffusion of world music in the digital age, focusing on the concept of “seismographic sound”.
The publication Music as Seismographic Sound / Tracking Down the Idea of Cultural Translation is a written radio pitch by Ania Mauruschat, closely following musicians in bi- or multi-lingual cultural contexts.
Ania Mauruschat is a radio journalist who has produced several features on sound art, with the German radio station Bayerischer Rundfunk, and the Swiss national radio station SRF.
The written pitch comes in the form of an appendix of source materials, including excerpts from interviews with selected musicians.

“Music is the fastest traveling medium. As some scholars like to argue, it even might have a seismographic potential. Thus, the Swiss ethnomusicologist Thomas Burkhalter speaks of "seismographic sounds" regarding the rather new phenomenon of global digital "world music 2.0". This musical phenomenon developed predominantly in the urban centres of the "Global South"—São Paulo, La Paz, Lagos, Cape Town, Jakarta, Beirut or Manila—, long before it drew the attention of journalists and researchers from the "Global North" in the early 2000s. [...]
To scrutinize and better understand this situation of in-betweenness, the radio feature will focus exemplary on two very distinct and yet similar case studies of seismographic sound generating hubs: firstly, the label Outhere Records, which is based in Munich, Germany and serves as a platform especially for the young Pan-African scene of world music 2.0; and secondly, the label Aakuluk Music in Iqaluit, Nunavut, the northernmost territory of Canada, which is devoted to developing the young musical scene in the Arctic to facilitate the search for identity and independence of the Inuit musicians in their postcolonial reality of community building.”
Also available in the Limited Edition box set Fog Friend Font – Ways of Doing Multilingual Sense.
Ania Mauruschat is a German literary and media scholar and lecturer focusing on radio and radio art research. Trained as a journalist and as an editor and educated in the humanities and social sciences, she worked from 2002 to 2012 full-time for the press and public radio stations. Mainly she was reporting about the ramifications of digitization on media, art, sciences and literature. This lead to a special research and work collaboration with the radio drama & media art department of the Bavarian broadcasting station Bayern2 (BR), amongst others resulting in the 15 part interview series “Suchmaschine wissen macht” (2007/08).
From 2003 to 2004 she cooperated for the Bavarian broadcasting station with the chair “Experimental Radio” at Bauhaus University Weimar (Germany) and from 2009 to 2011 she was a member of the Munich research group of the international and interdisciplinary research collaboration “Gegenwelten / Counterworlds” at the Ludwig-Maximilians-Universität (Munich). From 2012 to 2015 she worked as a scientific assistant, lecturer and project manager at the University of Basel (Switzerland). Since October 2017 she is elected speaker of the consortium Auditive Culture & Sound Studies of the German Society of Media Studies. Since January 2018 she is a member of the doctoral programme “Epistemologies of Aesthetic Practices” at the Collegium Helveticum in Zurich, Switzerland. She is finishing a PhD at the English Department of the University of Basel, it's working title being “Radiophonics, Noise & Understanding. Towards an Epistomology of Radio Art”.
Her main fields of interest are the transnational medium radio and electronic art, especially radio art as one of the oldest and most innovative and flexible electronic art forms.
order wishlist
Edited by Hinrich Sachs and Fredrik Ehlin.
Interviews with Kelly Fraser, Abundance Mutori, Thomas Burkhalter.
published in November 2019
English edition
17 x 24 cm (softcover)
80 pages
15.00 €
ISBN : 978-91-983195-5-2
EAN : 9789198319552
in stock