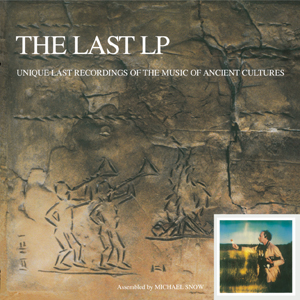 order
wishlist
Michael Snow's The Last LP is an extraordinary collection of tracks “of rare music derived from threatened, obsolete, or now-extinct cultures from around the world” that although the claiming of being field recordings of ancient musical experiences, are in fact pieces played, conceived and recorded by the artist himself.
As it was for Music For Piano, with this issue the Canadian artist further developed his conceptual investigation around the object-LP where the single elements (the record, the music, the text and the jacket) are so indissolubly intertwined to create what the artist calls a “sonics-sculpture-text”. Partly motivated by the announced obsolescence of the vinyl format, The Last LP is also a critical reflection on the impact of new technologies on the relationship between played and recorded music.
Prolific and multidisciplinary, Michael Snow (born 1929 in Toronto) is a major figure in the fields of painting, sculpture, photo, cinema, and video, as well as in sound and music. He made his first film in 1956, while his status as an international avant-garde filmmaker was consecrated in 1967 by Wavelength. His work features at most major international art events.
order wishlist
published in February 2019
11 tracks
30.00 €
in stock
table of contents