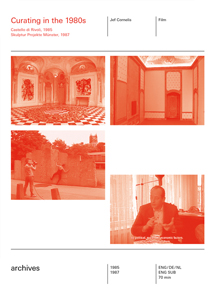 order
wishlist
The sixth volume of the “Archives” series, which is dedicated to landmark exhibitions and curatorial practices, brings together two films by Belgian filmmaker Jef Cornelis on the opening of the Castello di Rivoli in 1985, whose inaugural exhibition was conceived by curator Rudi Fuchs, and the 1987 edition of Skulptur Projekte Münster, organized by Kasper König and Klaus Bussmann.
Both reflect on the curatorial approaches of the 1980s and constitute a unique documentation of the artistic debates of the time while focusing, on the one hand, on the development of contemporary Italian art and, on the other hand, on how the 1987 Munster event put the ideas of 1960s Conceptualism into reality. To many it was a milestone event, marking the coming-of-age of a certain generation of German artists, as well as finally indicating the proper place of conceptual art: outside the museum. Overall, the Munster project carries out the Futurist tenet that "the museum is the graveyard of art" and the need to move out of the stasis of the museum context into real public space.
Filmed by Jef Cornelis with his habitually acute sense of dramaturgy and his provocative mise-en-scène of theoretical conflicts, they constitute a unique moving image documentation of those pioneering art events that renewed the exhibition format in the 1980s. The films show works by Gerhard Richter, Joseph Beuys, Sol Lewitt, Bruce Nauman, Giuseppe Penone, Luciano Fabro, Carl André, Keith Haring, Jenny Holzer, Jeff Koons, Giovanni Anselmo, Luciano Fabro, and Mario Merz, among others. They include interviews with and contributions by Chris Dercon, Kasper Konig, Klaus Bussman, Rudi Fuchs, Christian-Philipp Muller, and dancer Brygida Ochaim.
An essay by the art historian Yves Aupetitallot offers essential reference points that elucidate the context and controversies of these pivotal manifestations, and examines Cornelis' acute sense of dramaturgy, and his mise-en-scene of the theoretical conflicts.
Jef Cornelis (born 1941) has mainly worked for VRT, Belgian national television in Flemish. He has realized more than 200 films, especially on architecture, literature, and the arts.
order wishlist
Edited by Yves Aupetitallot.
Texts by Yves Aupetitallot and Jef Cornelis.
published in January 2019
bilingual edition (English / French)
13,5 x 19 cm
32 page booklet (42 b/w ill.)
25.00 €
ISBN : 978-3-03764-529-1
EAN : 9783037645291
in stock