New York based graffiti and visual artist Keith Haring (1958-1990) is widely recognized as an early tutelary figure of American street culture and as one of the most influential artist of the late 20th century. 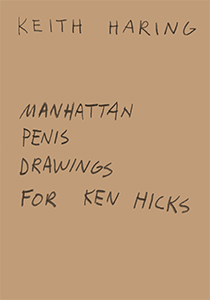 Manhattan Penis Drawings for Ken Hicks
2016
no text
Nieves
sold out
A collection of 70 penis drawings inspired by the borough of Manhattan. Made in one day in 1978, this early work forms a singular, ecclectic and playful guided tour of the city—including drawings and series such as Phallic buildings form 7th Ave., Drawing Penises in front of Tiffanys, Penis with doors – Carnegie music hall, The best place to draw penises, Self portrait at home…