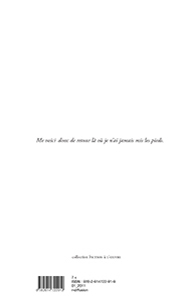 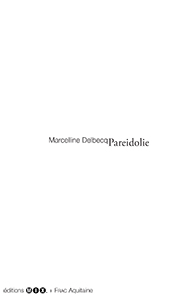 order
wishlist
This publication is part of a series of books in which writers are invited to create a narrative based on an artwork held at the Frac Aquitaine in France. Marcelline Delbecq chose Robert Barry's Returning, a projection of eighty-one slides that alternates images, words, and black interludes.
After studying photography in Chicago (Columbia College) and New York (ICP), Marcelline Delbecq (born 1977, lives and works in Paris) graduated from the Beaux-Arts school in Caen (France), then received a masters degree in curatorial studies from Université de Paris X-Nanterre. She was in residency at Pavillon in Palais de Tokyo in 2005 and was the French resident at Triangle in Brooklyn in 2007-2008.
She has gradually moved away from photography to focus on the cinematic and photographic potential of writing through installations, films, readings and publications. She uses both narrative and narrator (the voice) to create an uncanny world where texts, turned into sound, generate mental images shifting from description to fiction, from past to present, documentary to fiction. question.
order wishlist
published in January 2011
French edition
11,5 x 17,5 cm (softcover)
72 pages (ill.)
7.00 €
ISBN : 978-2-914722-91-9
EAN : 9782914722919
in stock