The Contemporary Condition – We Are Here, But Is It Now? (The Submarine Horizons of Contemporaneity) 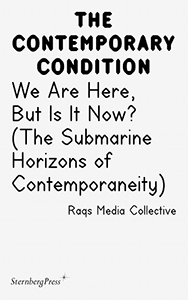 order
wishlist
Searching for the present: an account of contemporaneity by the Dehli-based trio Raqs Media Collective.
It is said that we know more about far-away galaxies than we do about the bottom of the oceans on earth. One could say something similar about our relationship to the future and to the contemporary. The distant future can seem more familiar than the deep present. We know it will come, regardless of whether or not we are around to witness it. Searching for the present is a bit like deep sea diving. How to dive without drowning in the turbulent waters of now? How to find and share sources of illumination in submarine darkness? When to surface and how to ride a strong current? Why stay afloat on the present moment at all? And what to look for while beachcombing the sea-floor of our time? These are some of the questions that Raqs Media Collective address in their account of contemporaneity, guided by a motley collection of figures lost and found in the turbulence of their practice.
This book is the volume 5 of “The Contemporary Condition” series, edited by Geoff Cox and Jacob Lund and published with Aarhus University, and ARoS Art Museum (Denmark). The aim of the series is to question the formation of subjectivity and concept of temporality in the world now. It begins from the assumption that art, with its ability to investigate the present and make meaning from it, can lead to an understanding of wider developments within culture and society. Addressing a perceived gap in existing literature on the subject, the series focuses on three broad strands: the issue of temporality, the role of contemporary media and computational technologies, and how artistic practice makes epistemic claims.
Raqs Media Collective is a group of three media practitioners—Jeebesh Bagchi (New Delhi, 1965), Monica Narula (New Delhi, 1969) and Shuddhabrata Sengupta (New Delhi, 1968)—based in New Delhi. Raqs has been variously described as artists, curators, researchers, editors, and catalysts of cultural processes. Their work, which has been exhibited widely in major international spaces and events, locates them at the intersections of contemporary art, historical enquiry, philosophical speculation, research, and theory—often taking the form of installations, online and offline media objects, performances, and encounters.
They live and work in Delhi, based at Sarai, Centre for the Study of Developing Societies, an initiative they co-founded in 2000. They are members of the editorial collective of the Sarai Reader series. In 2008 they were co-curators of the Manifesta 7 biennale.
Recent solo exhibitions include “Lightbox,” Tate Britain, London (2009), and “Escapement,” Frith Street Gallery, London (2009); group exhibitions include “Experimental Geography,” travelling exhibition, Canada and USA (2008–11), and “Indian Highway,” Serpentine Gallery, London (2008) and Astrup Fearnley Museum, Oslo (2009).
order wishlist
Edited by Geoff Cox and Jacob Lund.