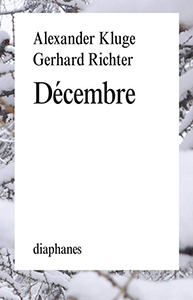 order
wishlist
Painter Gerhard Richter and filmmaker and writer Alexander Kluge composed a collection of 39 stories in connection with the history of the 20th century and the month of December, illustrated with 39 photographs.
Alexander Kluge is recognised internationally as an author and filmmaker; he is regarded as a driving force behind New German Cinema and as one of the major German fiction writers and essayists of the post-war period. What is less well known is that Kluge has revolutionized German television as well. Since 1988 he has been producing a magazine programme for commercial television which, as Tom Tykwer puts it, is “antidotal” to the common lack of imagination in the medium.
See also Jürgen Schreiber: Richter, peintre d'Allemagne – Le drame d'une famille; Marcus Schmickler – Richters Patterns.
order wishlist
Translated from the German by Hilda Inderwildi and Vincent Pauval (original title: Dezember, Bibliothek Suhrkamp, 2010).
published in June 2012
French edition
13,5 x 21 cm (softcover)
128 pages (ill.)
20.00 €
ISBN : 978-3-03734-237-4
EAN : 9783037342374
in stock