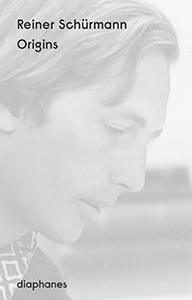 order
wishlist
The semi-autobiographical account of the life of a young German in the 1960s, between Germany, Israel, and The United States. First translation of philosopher Reiner Schürmann's only literary work, originally published in French in 1976.
“Born too late to see the war and too early to forget it.” So writes Reiner Schürmann in Origins, a startlingly personal account of life as a young man from postwar Germany in the 1960s. Schürmann's semi-autobiographical protagonist is incapable of escaping a past he never consciously experienced. All around him are barely concealed reminders of Nazi-inflicted death and destruction. His own experiences of displacement and rootlessness, too, are the burden of a cruel collective past. His story presents itself as a continuous quest for—and struggle to free himself from—his origins. The hero is haunted relentlessly by his fractured identity—in his childhood at his father's factory, where he learns of the Nazi past through a horrible discovery; in an Israeli kibbutz, where, after a few months of happiness, he is thrown out for being a German; in postwar Freiburg, where he reencounters a friend who escaped the Nazi concentration camps; and finally, in the United States, where his attempts at a fresh start almost fail to exorcise the ghosts of the past.
Originally published in French in 1976, Origins was the winner of the coveted Prix Broquette-Gonin of the Académie Francaise. In close collaboration with the author, this translation was created in the early 1990s, but Schürmann's premature death in 1993 prevented its publication process and, as a result, one of the most important literary accounts of the conflicted process of coming to terms with the Holocaust and Germany's Nazi past has been unavailable to English readers until now. Candid and frank, filled with fury and caustic sarcasm, Origins offers insight into a generation caught between disappointment and rage, alignment and rebellion, guilt and obsession with the past.
Reiner Schürmann (1941–1993) was a German philosopher. He was born in Amsterdam and lived in Germany, Israel, and France before immigrating to the United States in the 1970s, where he was professor and director of the Department of Philosophy at the New School for Social Research in New York. He is the author of three books on philosophy: Heidegger on Being and Acting, Wandering Joy, and Broken Hegemonies. Origins is his only work of fiction. He never wrote nor published in his native German.
order wishlist
Translated from the French by Elizabeth Preston (original title: Les Origines, Fayard, 1976).
published in January 2016
English edition
12,8 x 20 cm (softcover)
272 pages
22.95 €
ISBN : 978-3-03734-597-9
EAN : 9783037345979
in stock