Tomorrow the Manifold – Essays on Foucault, Anarchy, and the Singularization to Come 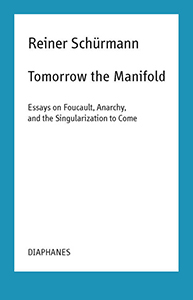 order
wishlist
This collection assembles key essays of Reiner Schürmann centering on the concepts of anarchy and the singularization to come. Setting out from the question of the status of practical philosophy at the end of metaphysics, these texts track the crucial role of Schürmann's engagement with the work of Michel Foucault between 1983 and 1991.
Drawing on his highly original reading of the philosophical tradition, Schürmann traces the status of identity and difference in Foucault's conception of history to develop a radical phenomenological understanding of anarchy. The texts pose the question of the fate of philosophy after the critique of the subject and the collapse of the divide between theory and praxis, philosophy and politics. Besides making Schürmann's seminal readings of Foucault widely available, the essay collection offers a concise and accessible introduction to Schürmann's thought and documents a shift in his thinking during the 1980s. Taken together, these pivotal essays introduce the reader to the entirety of Schürmann's most urgent concerns and assemble the conceptual tools for the project of his last book, Broken Hegemonies. This topology of broken hegemonies, which in many ways offers an alternative to Foucault's genealogical strategy, takes the form of a subversive re-reading of the history of Western metaphysics that urges our present relentlessly toward the singularization to come. To the reader unfamiliar with Schürmann's work, these texts establish him as one of the most radical thinkers of the late 20th century, whose work might eventually become legible in our present.
Reiner Schürmann (1941–1993) was a German philosopher. He was born in Amsterdam and lived in Germany, Israel, and France before immigrating to the United States in the 1970s, where he was professor and director of the Department of Philosophy at the New School for Social Research in New York. He is the author of three books on philosophy: Heidegger on Being and Acting, Wandering Joy, and Broken Hegemonies. Origins is his only work of fiction. He never wrote nor published in his native German.
order wishlist
Edited by Malte Fabian Rauch and Nicolas Schneider.
published in May 2019
English edition
13,5 x 21 cm (softcover)
256 pages
25.00 €
ISBN : 978-3-0358-0099-9
EAN : 9783035800999
in stock