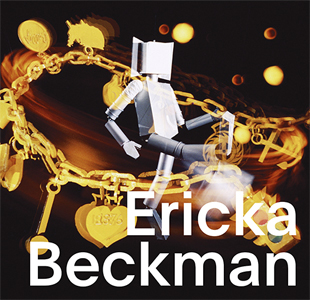 order
Retrospective monograph on all Beckman's video works since the 1970s.
Ericka Beckman makes films without plots in a conventional sense, constituting them rather from themes: socialization, acculturation, competition, and the organization of thoughts and memory. Since they are largely structured like games, they do not have characters; they have players. Like everything else about the films—the scenery, the props, the animation—the players are representatives, stand-ins contributing to Beckman's abstract ruminations on culture in a time-based medium. This lavishly illustrated reference monograph documents every film Ericka Beckman has made since her days as a CalArts graduate in the 1970s, and includes storyboards, production stills and notes, the librettos of her musicals, as well as a thorough photo-documentation of her multimedia installations. Together with an anthology of critical writing on the artist's work, the publication features an interview encompassing the artist's entire career by Lionel Bovier and Fabrice Stroun, as well as new contributions by Vera Dika, John Beeson, Jeanne Graff, and renowned game theorist Eric Zimmerman.
Over her three-decade career, Ericka Beckman (born 1951 in Hampstead, NY, lives and works in New York)'s playful yet formally demanding films challenge traditional aesthetic, and cultural values, that mix games with fairytales to create hybrids with new rules. Beckman uses play in every sense to shape her message. “The result is a ‘satisfying, even delightful slipperiness of meaning, a mental vertigo induced by the changefulness of contexts and rules in regard to a given word or object” (Sally Banes Millenium Film Journal, 1984).
Beckman's work has been shown at festivals, museums, and galleries around the world. Her one-woman shows include: the Museum of Modern Art, New York, the Smithsonian's Hirshhorn Museum, Washington,D.C., and the Walker Art Center, Minneapolis. She has been in three Biennials at the Whitney Museum of American Art, New York. Amongst the numerous awards received for her work are: two grants from the National Endowment for the Arts, two New York State Council on the Arts grants, and one from Massachusetts Council on the Arts. Her works are in the film collection of New York's Museum of Modern Art, Anthology Film Archives, plus the British Film Institute, as well as The Walker Art Center Media Collection.
order
Edited by Fabrice Stroun and Geraldine Tedder.
Texts by John Beeson, Lionel Bovier, Vera Dika, Jeanne Graff, Fabrice Stroun, Eric Zimmerman.