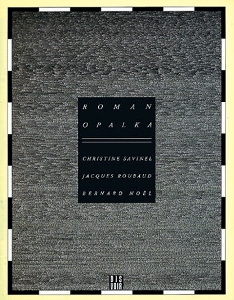 order
wishlist
This monograph investigates Opalka's relationship with numbers, time and infinity. With an original long-term interview of the artist which ran on for more than twenty years.
In 1965 Roman Opalka started to represent time on his own and the world's by painting numbers on canvas. Beginning with the number 1 and continuing through 2, 3, 4, 5, and so on, he had reached the almost unimaginable figure of 5 millions before his death in 2011. Opalka had chosen to come directly to grips with time and death, for a lifetime. Yet his program, though irreducibly singular, is not ineffable. The volume explores the ethical and aesthetical dimensions of Opalka's project and presents one of the major artists of the late twentieth century.
order wishlist
Texts by Bernard Noël, Jacques Roubaud, Christine Savinel.
published in October 1996
English edition
16,5 x 21,5 (softcover)
128 pages (16 color ill.)
21.00 €
ISBN : 978-2-906571-57-0
EAN : 9782906571570
in stock
Roman Opalka: other titles