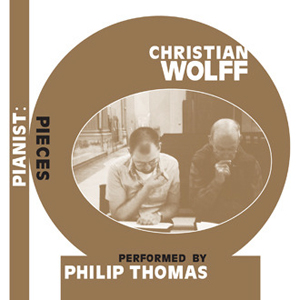 wishlist
As a body of repertoire, these 150 pieces of Christian Wolff are remarkable for their freshness of musical thought and energy (John Cage considered Wolff to be the most “musical” of the experimental composers).
Wolff uniquely blends experimental concerns with classical tendencies. In these pieces not only are older composers referenced (Ives, Schumann) but Wolff's love of clarity of line and transparency of texture betrays an empathy with Webern, Haydn and Bach. This aesthetic is, however, combined with a tendency toward discontinuity and fragmentation, isolated sounds and silence, and, perhaps most significantly, indeterminacy of notation. Notational techniques which appear in some or all of the works featured here include: “tablature” notations which prescribe which fingers to play but not which notes; notes without specified duration; notes which may be played in any clef and octave; the omission of any indications as to tempo, dynamics and articulation; and Wolff's characteristic “wedge,” which means a pause or breath of any length.
Philip Thomas (born 1972 in North Devon) specialises in performing new and experimental music, including both notated and improvised music. He places much emphasis on each concert being a unique event, designing imaginative programmes that provoke and suggest connections. He is particularly drawn to the experimental music of John Cage, Morton Feldman and Christian Wolff, and composers who broadly work within a post-Cageian aesthetic. In recent years he has been particularly associated with the music of Christian Wolff, giving the world premiere of his Small Preludes in 2009, the UK premiere of Long Piano (Peace March 11), having co-edited and contributed to the first major study of Wolff's music, Changing the System: the Music of Christian Wolff, published by Ashgate Publications in 2010.
Christian Wolff was born in 1934 in Nice, France, to the German literary publishers Helen and Kurt Wolff, who had published works by Franz Kafka, Robert Musil, and Walter Benjamin. After relocating to the U.S. in 1941, they helped to found Pantheon Books with other European intellectuals who had fled Europe during the rise of fascism. The Wolffs published a series of notable English translations of European literature, mostly, as well as an edition of the I Ching that came to greatly impress John Cage after Wolff had given him a copy.
Wolff became an American citizen in 1946. When he was sixteen his piano teacher Grete Sultan sent him for lessons in composition to the new music composer John Cage. Wolff soon became a close associate of Cage and his artistic circle, which included the fellow composers Earle Brown and Morton Feldman, the pianist David Tudor, and the dancer and choreographer Merce Cunningham. Cage relates several anecdotes about Wolff in his one-minute Indeterminacy pieces.
wishlist
published in October 2014
3CD set packed in a 8 page digipack
sold out
table of contents