German philosopher, art historian, literary critic, art critic and translator, Walter Benjamin (1892-1940), associated with the Frankfurt school, is considered one of the most important theorists of the twentieth century. 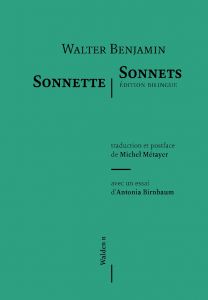 Sonnette / Sonnets
2021
bilingual edition (German / French)
Walden n
The seventy-three sonnets, unpublished in French, written by Walter Benjamin in memory of his friend Fritz Heinle, a poet who committed suicide at the age of 19, in despair or in protest against the advance of the First World War (bilingual edition).