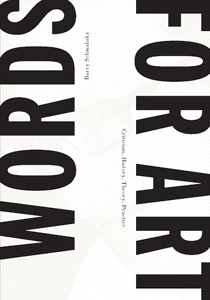 order
wishlist
Surveying figures ranging from Clement Greenberg to Jacques Derrida, this compendium of 20 short essays by New York-based critic Barry Schwabsky focuses on his reflections on art writing itself.
In this volume of short essays, Barry Schwabsky reveals himself to be a critic of uncommon range and erudition. Walter Benjamin's views on color, E. H. Gombrich's theory of perception, Mel Bochner's and Liz Kotz's narratives of Conceptualism, and Sarah Thornton's peregrinations in the “art world” are but a few of the topics explored in this volume. In an era of hyper-specialization and rigid academic protocols, Schwabsky revives a form of criticism one imagined barely existed— a criticism of varied interests and passionate opinions.
—James Meyer, author of Minimalism: Art and Polemics in the Sixties

By weaving together evocative and often uncharted episodes from art history, literature, and philosophy, a critical poetic emerges, and an offense of interference and reworked perspectives surfaces from Schwabsky's essays. Unconcerned with categorical methodologies or totalizing approaches to criticism, Schwabsky writes with nonsequential energy that obliges both artists and critics to complexity, curiosity, and courage.
—Michelle Grabner, artist and professor, School of the Art Institute of Chicago

Like many of the best critics, Schwabsky has the ability to describe things so precisely that no explicit evaluation is necessary. Every time an idea is introduced, it is allowed to hold the reader's attention for the time it takes to ground a judgment, and no longer. This gentle rhythm gives the essays an unillusioned clarity and undogmatic authority rarely found in writing about art.
—Malcolm Bull, author of Anti-Nietzsche and University Lecturer in Fine Art at Oxford University
Barry Schwabsky is the art critic of The Nation. He has been writing about art for the magazine since 2005, and his essays have appeared in many other publications, including Flash Art (Milan), Artforum, the London Review of Books and Art in America. His books include The Widening Circle: Con­sequences of Modernism in Contemporary Art, Vitamin P: New Perspectives in Painting and several volumes of poetry, the most recent being Book Left Open in the Rain (Black Square Editions/The Brooklyn Rail). Schwabsky has contributed to books and catalogs on artists such as Henri Matisse, Alighiero Boetti, Jessica Stockholder and Gillian Wearing, and has taught at the School of Visual Arts, Pratt Institute, New York University, Goldsmiths College (University of London) and Yale University.
order wishlist
published in December 2013
English edition
15 x 21,5 cm (softcover)
243 pages
19.00 €
ISBN : 978-3-95679-002-7
EAN : 9783956790027
in stock