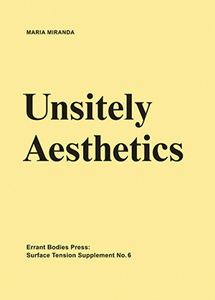 order
wishlist
The shifting and troubled relationship of artwork and audience in network culture.
In the last 10 years we have experienced a seismic shift in media culture, as the social media revolution of the noughties has brought vastly expanded networking, mobility and connection. This shift has significantly altered the making of art as well as the ways that audiences engage with art. Unsitely Aesthetics seeks to describe and understand these changes in art production and its accompanying new aesthetics, coining the term “unsitely” to point to the dispersed way that many artists are now making work across the networks both online and offline.
A departure point for the book is the idea that the traditional art historical term of site and site-specificity offers a new and strategic way to understand the shifting and troubled relationship of artwork and audience in network culture. This is a counterintuitive move against the sense of network culture as immaterial flows in a placeless world, thus underlining the situatedness of the making and experiencing of art that is still significant. The book suggests that with the unsitely aesthetics of today's contemporary artists there is the possibility of a more democratic art with the internet acting as a public space for artists to encounter and even call forth new publics.
The book includes interviews and conversations with leading international artists and writers.
Following the publication of Surface Tension – Problematics of Site in 2003, Surface Tension appears regularly as a series of published Supplements (launched 2006) that continues the artistic and philosophical program initiated in the original anthology. The series addresses questions of site-specific art, public and architectural space, and location-based practices, supporting investigations onto public practices through writing, documentation, and field work, while questioning what role such practices can offer in defining contemporary culture.
Maria Miranda is a Melbourne-based art-maker and art-researcher. She has maintained a collaborative art practice, Out-of-Sync, with sound artist Norie Neumark for over 15 year, making work that engages with questions of culture, place and memory. Currently she is Artistic Director of Gallery Ellipsis, the online gallery of the Centre for Creative Arts La Trobe University. From 2010 to 2012 Maria Miranda was a post-doctoral fellow at La Trobe University, Melbourne.
order wishlist
Contributions by Barbara Campbell, Linda Carroli, Hugh Davies, Bec Dean, Renate Ferro, John Craig Freeman, Jo-anne Green, Teri Hoskin, Lucas Ihlein, Yao Jui-Chung, kanarinka (a.k.a. Catherine D'Ignazio), Scott Kildall, Deborah Kelly, Natalie Loveless, Michael Takeo Magruder, Timothy Conway Murray, Norie Neumark, Victoria Scott, Brooke Singer, Igor Stromajer, Helen Thorington, Darren Tofts.
published in September 2013
English edition
16,5 x 23,5 cm (softcover)
312 pages (b/w ill.)
22.00 €
ISBN : 978-0-9827439-8-0
EAN : 9780982743980
in stock