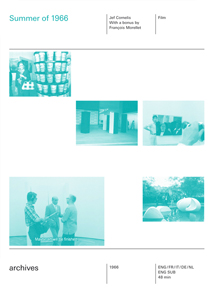 order
wishlist
A summer of art.
“Summer of 1966: 33a Biennale di Venezia & 2e Salon des galeries-pilotes de Lausanne” by Jef Cornelis is the third title in the “Archives” collection dedicated to landmark exhibitions and curatorial practices, providing sources and moving images to a growing field of research—that of curatorial studies and exhibition history. The first two DVDs constitute a unique yet subjective testimony on the famous documenta 4 (1968) and documenta 5 (1972).
The 1966 Venice Biennale was one of the first exhibitions that Cornelis filmed. It was in this film that he laid the foundations of his methodology: to depict the exhibition as the closed space of a community preoccupied with the issues and conflicts that concerned its members, rather than to make films about art itself. He filmed some of the major players of the time, whether they belonged to the American or the European scene, within which French artists and critics manifested a powerful presence. On his way back to Belgium, Cornelis stopped at the second "Salon international des galeries-pilotes" (Lausanne), an experimental manifestation that influenced the Basel Art Fair, which was created in 1970. To fully illustrate what was at stake in the 1966 Venice Biennale, the DVD also includes a short film by François Morellet about the Groupe de Recherche d'Art Visuel (GRAV), whose member Julio Le Parc won the Golden Lion that year, raising the questions about collective and singular authorship.
Jef Cornelis (born 1941) has mainly worked for VRT, Belgian national television in Flemish. He has realized more than 200 films, especially on architecture, literature, and the arts.
order wishlist
Edited by Yves Aupetitallot.
Texts by Jef Cornelis and François Morellet.