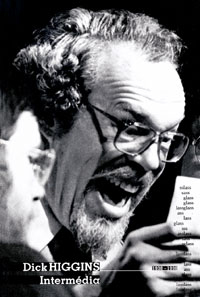 order
wishlist
First publication in French on Fluxus artist, including the transcription of an intervention by Higgins at the International Conference on Action Art in October 1998. With texts by Charles Dreyfus and Jacques Donguy.
Dick Higgins (1938-1998) was a poet, composer, performer, publisher and art theorist. He studied with John Cage and Henry Cowell, participated in the elaboration of the first happening in 1958 and co-founded Fluxus in 1961. A seminal figure in the concrete poetry movement, he is the founder of Something Else Press, realizing a considerable amount of publications about the artists of this time. He introduced the notion of "intermedia" to describe his artistic activities, defining it in a 1965 essay by the same name. His visual work has been shown in many personal and collective exhibitions in the entire world. His texts are published in many reviews and he also produced a quantity of disks, films and videos.
order wishlist
Texts by Dick Higgins, Charles Dreyfus and Jacques Donguy.
published in 1999
French edition
22,7 x 34 cm (softcover)
24 pages (b/w ill.)
8.00 €
ISBN : 978-2-920500-18-1
EAN : 9782920500181
in stock