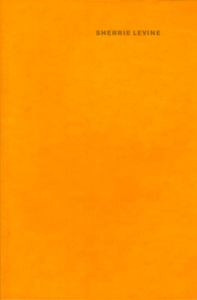 order
wishlist
Poem by Sherrie Levine; texts by Susanne Anna, Christian Bernard, Michel Assenmaker, Erich Franz and Susan Kandel.
Sherrie Levine was born in Hazelton, Pennsylvania in 1947, and was raised in St. Louis, Missouri. She atteded the University of Wisconsin, Madison, where she received a B.A. in 1969 and M.F.A. in 1973. She lived in Berkeley, California for eighteen months before moving to New York City in 1975. Since then, except for the two years she lived in Los Angeles from 1990 to 1992, she has lived and worked in New York City. She has shown widely in gallery and museum exhibitions in the United States, Europe and Japan. She has had solo museum exhibitions at the Wadsworth Atheneum (1987), Hirschorn Museum (1988), High Museum (1988), Palais des Beaux-Arts (1990), San Francisco Museum of Modern Art (1991), Philadelphia Museum of Art (1993), Portikus (1994), The Menil Collection (1995), and Museum of Contemporary Art in Los Angeles (1995). In 1991 and 1992 a survey exhibition organized by the Kunsthale Zürich travelled to the Westfälisches Landesmuseum in Münster ; the Rooseum in Malmö, and the Hôtel des arts in Paris. In 1996 and 1997 an exhibition of her photography organized by the Museum d'Art Moderne et Contemporain in Geneva travelled to the FRAC des pays de la Loire in Nantes, the South London Gallery and Casino in Luxembourg.
order wishlist
Published with the Museum Schloss Morsbroich (Leverkusen).
published in 1998
trilingual edition (English / German / French)
20 x 30 cm
60 pages (7 colour & 1 b/w reproductions)
22.00 €
in stock
excerpt
Sherrie Levine: other title