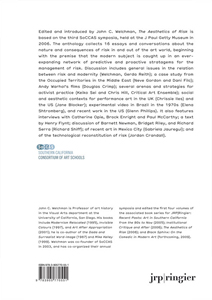 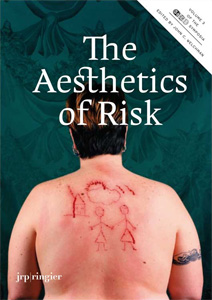 order
wishlist
16 essays and conversations about the nature and consequences of risk in and out of the art world.
Edited and introduced by John C. Welchman, The "Aesthetics of Risk" is based on the third SoCCAS symposia, held at the J. Paul Getty Museum. The anthology collects 16 essays and conversations about the nature and consequences of risk in and out of the art world, beginning with the premise that the modern subject is caught up in an ever-expanding network of predictive and proactive stratagems for the management of risk.
Discussion includes general issues in the relation between risk and modernity (John C. Welchman, Gerda Reith); a case study from the Occupied Territories in the Middle East (Neve Gordon and Dani Filc); Andy Warhol's films (Douglas Crimp); several arenas and strategies for activist practice (Keiko Sei and Chris Hill, Critical Art Ensemble); social and aesthetic contexts for performance art in the UK (Chrissie Iles) and the US (Jane Blocker); experimental video in Brazil in the 1970s (Elena Shtromberg), and recent work in the US (Glenn Phillips). It also features interviews with Catherine Opie, Brock Enright and Paul McCarthy; a text by Henry Flynt; discussion of Barnett Newman, Bridget Riley, and Richard Serra (Richard Shiff); of recent art in Mexico City (Gabriela Jauregui); and of the technological reconstitution of risk (Jordan Crandall).
John C. Welchman is a professor at the Department of Visual art of University of California, San Diego. His works focuses on modern and contemporary art history and critical theory. His numerous publications include a monograph on Mike Kelley, of which he has also edited the collected writings (MIT Press, Les presses du réel / JRP|Ringier). 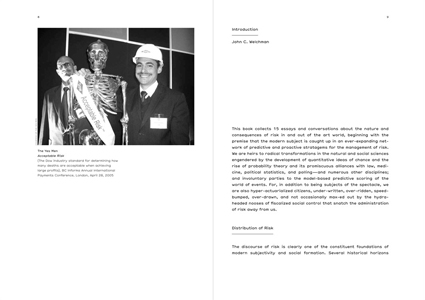 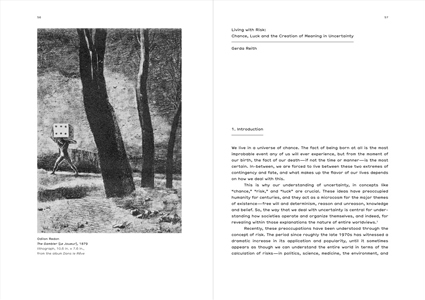 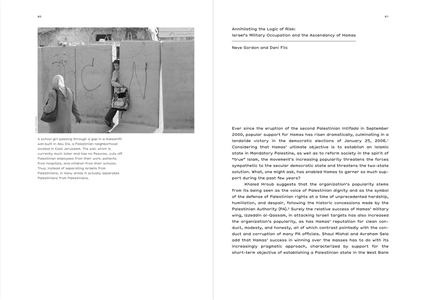 The Aesthetics of Risk

The Aesthetics of Risk