Bill Vorn (born 1959 in Montreal, where he lives and works) is active in the field of Robotic Art since 1992. His installation and performance projects involve robotics and motion control, sound, lighting, video and cybernetic processes. He pursues research and creation on Artificial Life and Agent Technologies through artistic work based on the Aesthetics of Artificial Behaviors.
He holds a Ph.D. degree in Communication Studies from UQAM (Montreal) for his thesis on Artificial Life as a Media. He teaches Electronic Arts in the Department of Studio Arts at Concordia University (Intermedia/Cyberarts program) where he holds the rank of Full Professor.
His work has been presented in multiple international events, including Ars Electronica, ISEA, DEAF, Sonar, Art Futura, EMAF and Artec. He has been awarded the Vida 2.0 award (1999, Madrid), the Leprecon Award for Interactivity (1998, New York), the Prix Ars Electronica Distinction award (1996, Linz) and the International Digital Media Award (1996, Toronto). He has worked in collaboration with many canadian artists (including Edouard Lock, Robert Lepage, Gilles Maheu, LP Demers and Istvan Kantor). He was cofounder of the electronic pop music band Rational Youth with Tracy Howe in 1981. 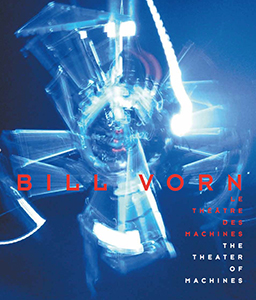 The Theater of Machines
2014
bilingual edition (English / French)
CDA (Centre des Arts)
Artist Bill Vorn creates robotics as part of his research on artificial life and machine anthropomorphism. This catalogue, intended to be a robograhpy of the artist, attempts to understand, if perhaps not the phenomenon, then at least Bill Vorn's innovative approach to it (with contributions by Ian Fenelon and Jean-Paul Fourmentraux).