Józef Robakowski (born 1939 in Poznań, lives and works in Łódź, Poland) is an artist and creator of experimental films, videos, installations, performances and photographs, as well as a cultural promoter and art theorist. He coordinated some key artistic movements of the second half of the twentieth century in Poland, from the collective Zero-61 (1961-1969), which was inspired by the tradition of metaphorical montage used by avant-garde cinema, to the Workshop of the Film Form (Warsztaty Formy Filmowej, 1970-1977). As promoter of the Polish progressive artistic movement, his research led him to question the language, mechanics and material of film, uniting these elements with an interest in the avant-garde conceptual tradition filtered through the lens of authenticity and personal identity. 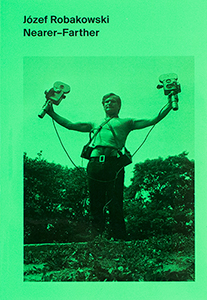 Nearer–Farther
2017
English edition
Mousse - Mousse Publishing (books)
First major catalogue dedicated to one of the biggest representatives of Polish art and experimental cinema, Józef Robakowski. The publication presents some of the artist's most significant works and his research on the language of film and montage. It includes and interview with Marina Abramović, one of Robakowski's colleague at the time of the Soviet Union.