Ismaïl Bahri (born 1978) studied art in Paris and Tunis, his birth town. He works in both cities. His work has been presented in various places and events such as La Criée Centre d'Art Contemporain (Rennes), as part of the Ateliers de Rennes – Biennale d'Art Contemporain, Les Églises – Centre d'Art Contemporain (Chelles), the LAM (Villeneuve-d'Ascq), the Staatliche Kunsthalle (Karlsruhe), Kunst Im Tunnel (Düsseldorf), the British Film Institute (London), the Calouste Gulbenkian Foundation (Lisbon), the Sharjah Biennial, among others. His films have been selected at several international film festivals such as the TIFF (Toronto), NYFF (New York), the IFFR (Rotterdam) or the FID (Marseille). The artist is represented by the Galerie Les Filles du Calvaire, Paris, and the Selma Feriani Gallery, Tunis & London. 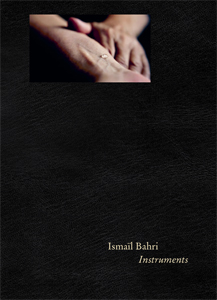 Instruments
2017
bilingual edition (English / French)
Jeu de Paume - Monographs
sold out
Instruments is the catalogue accompanying Ismaïl Bahri's exhibition of the same title at the Jeu de Paume. It is also his first monograph. Bahri's oeuvre, which dates back to the 2000s, is like a precise and sensitive record of events and experiments; its often mechanical kinetics are particularly evocative of the film process. His experiments are based on the tiny nuances and minute developments that occur when simple things are brought into contact with each other. They demand an acuteness of gaze that leads one to question the limits of perception and the visible.