Daniel Gustav Cramer (born in 1975 in Neuss, Germany, lives and works in Berlin) often begins with a story or an image which evolves imperceptibly. Using series, fragmentation and ellipsis, he creates temporal interstices from one sequence to the next, in-between places which stimulate the imagination. He invites spectators to enter into these narrow openings and to locate their own detours. Daniel Gustav Cramer's works are not directive; they bury themselves in foggy decor stitching a labyrinth of little moments freed from beginning and end.
His work was shown in various exhibition venues including Kunsthaus, Glarus, Badischer Kunstverein in Karlsruhe and Kunsthalle Lisbon. In 2012 he also participated in DOCUMENTA 13 in Kassel.
Since 2007, Daniel Gustav Cramer works in partnership with Haris Epaminonda on The Infinite Library, a project which has taken the form of books and an archive. 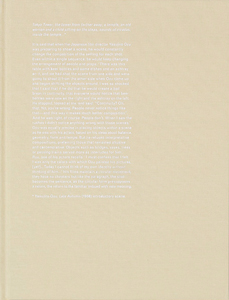