In his work, which includes videos, video installations, texts, and drawings, British artist Ed Atkins (born in 1982, lives and works in London) explores the material quality of our contemporary visual world and its existential resonance. He records his videos in high-definition with powerful surround sound; these new options for technical creation and presentation have the paradoxical capacity of reproducing life-like materiality and bodies using immaterial means. This paradox is also a theme in Atkins' work, which revolves around the cadaver, disease, and death, motifs that raise awareness of the viewers' own corporeality. Atkins' digital compositions use saturated colors and precise editing rhythms, and show archive material of forests, beaches, fruit, and clips from zombie films, as well as computer-generated animations. They are accompanied by sound, which ranges from guitar crescendos, horror film melodies, and dialogue, to the murmurs of the artist himself behind the camera. 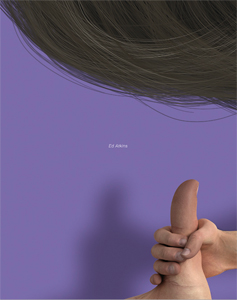