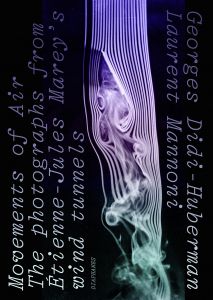 pre-order
wishlist
The book "Movements of Air" reprints the breathtaking pictures of Étienne-Jules Marey, that he took between 1899 and 1901 during his scientific experiments with moving air and smoke, and complements them with two essays of Georges Didi-Huberman and Laurent Mannoni.
Laurent Mannoni accurately reflects Marey's experimental approach. As the founder of the "graphic method," Marey is also the developer of an aerodynamic wind tunnel. His experiments' photographs in fluid motion introduce us to a whole world of movements, turbulences and fluids. The resulting images influenced generations of scientists and artists alike.
Georges Didi-Huberman expands on the philosophical debates surrounding these aesthetically and technically instructive images. He makes Bergson the main interlocutor and even the secret commentator of the scientist's experiments. Even though the scientist's main interest was graphic information, Huberman shows us how the flow of all things draws the ingenious experimenter to a photographic practice that creates drags, streaks, expansions, and visual dances.
Marey's wind tunnel photographs were therefore themselves causes of turbulence in the history of images. The two artists Florian Dombois and Christoph Oeschger explore the "graphical" vortices of the last 120 years and provide at the end of the book a collage from historical and contemporary material interlaced with their own image making in Dombois's wind tunnel at the Zurich University of the Arts.
The book was published originally in French on the occasion of the exhibition "Mouvements de l'air" at the Musée d'Orsay. The texts are now available for the first time as an English translation.
Published following the exhibition Mouvements de l'air – Étienne-Jules Marey (1830-1904), photographe des fluides at the Musée d'Orsay in 2005.

The inventor among other things of chronophotography, the famous physiologist Étienne-Jules Marey (1830-1904) devoted his life to the study of movement in all its forms: animal and human locomotion, blood circulation, displacement of objects and fluids, gravity. Marey was one of the first theoreticians of aeronautics, the study of which led him to his aesthetic apotheosis during the years 1899-1902. His last major works were devoted to the observation and instant photography of smoke currents produced in his "smoke machine", one of the first modern aerodynamic wind tunnels, showing the diverse shapes of wisps of smoke according to the obstacle encountered in their trajectory. The shots thus made by Marey, fantastical images combining science and dream, poetry and technique, are aesthetic masterpieces that belong equally to the history of art, of photography, of aeronautics and aerodynamics.
Art historian and philosopher Georges Didi-Huberman is a lecturer at the École des Hautes Études en Sciences Sociales, Paris. He published more than fifty works and is a multiple award winner in many prestigious prizes.
Laurent Mannoni is head of heritage at the Cinémathèque française and the Centre national de la cinématographie. As an author and curator, he focuses on the history of film technology from its earliest origins to the present day.
pre-order wishlist
Edited by Florian Dombois and Christoph Oeschger.
Translated by Aubrey Birch and Lucy Wright (original titre: Mouvements de l'air – Étienne-Jules Marey, photographe des fluides, Gallimard, 2004).
2023 (publication expected by 1st quarter)
English edition
16 x 22 cm (softcover)
384 pages (180 ill.)
40.00 €
ISBN : 978-3-0358-0512-3
EAN : 9783035805123
forthcoming