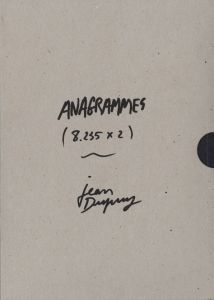 order
wishlist
Jean Dupuy's anagrams in three volumes, with a selection of artworks.
Jean Dupuy (1925-2021) lived and worked in Roquesteron (France) and New York City.
He is a pioneer of work combining art and technology. In 1968, he received the Experiment in Art and Technology award, organized by Billy Klüver and Robert Rauschenberg, for his play entitled Heart Beats Dust. Immediately after this recognition, the play was simultaneously shown at the Brooklyn Museum and, through a second version, at the now mythical Pontus Hulten's The Machine as Seen at the End of the Mechanical Age exhibition at the MoMa. He works in the fields of conceptual art, performance art, painting, installations, sculptures and video art. In the 1970s he curated many performance art events involving different artists from Fluxus, the New York's avant-garde and neo-dada scene. Many of his works are part of important collections such as Centre Pompidou in Paris, Mamac of Nice, Mac of Lyon, The Barnes Foundation, New York, The Emily Harvey Foundation, New York.