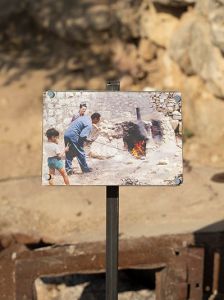 pre-order
wishlist
Through Sinnokrot's agriculture research platform Sakiya, and other ongoing projects that span moving image, sculpture, and socially-engaged practice, Palestine Is Not a Garden examines the potential to develop counter-strategies that effectively decolonial the social, political, economic, and narrative structures that goven relationships to nature in the Occupied Palestinian Territories.
The ideal of the garden conjures conflicting imaginaries of security and abundance, disobedience and control, inside and outside, and the specters of exile and return. These binaries have ontologically distinguished the garden from untamed wilderness. The ideal of the garden in the Occupied Palestinian Territories (OPT) delineates a further series of genealogies that range from the Ottoman-era and subsequent British privatization of commonly-owned land the commons more broadly. The avowed colonial project of "making the desert bloom," the continued rise of neoliberalism, "bubble" economics, occupation, consumer debt, and rampant forms of real estate speculation, have further conspired to complicate how we understand the meaning and concept of the garden. These historical processes have produced a conundrum in the region that can be summed up, in part, in the statement Palestine is not a garden.
Presenting research and material relating to an evolving series of projects, including the agriculture research platform Sakiya, this volume explores how Nida Sinnokrot's practice, operating as it does through interdisciplinary research methods, agricultural and architectural projects, and collaborative processes, reveals and anticipates a potential future for the Palestinian garden. Founded by Sinnokrot in 2016, with Sahar Qawasmi (an architect specializing in restoration and cultural heritage), Sakiya is an art, science, and agriculture platform situated on a re-wilded hillside in the village of Ein Qinya, northwest of Ramallah. Involving farmers, crafts and small industry initiatives, artists, and scholars, the platform is a progressive research academy that proposes a sustainable model—through the production of experimental knowledge—for integrating local agricultural methods within the framework of an interdisciplinary cultural program of activities.
Nida Sinnokrot (born 1971) is a Palestinian-American artist, focusing on installation art, and filmmaker. His films (Palestinian Blues) as well as his installations and sculptures constitute sensitive responses to the nightmare of the Israeli-Palestinian conflict.
pre-order wishlist
Edited by Anthony Downey.
2022 (publication expected by 2nd quarter)
English edition
20,5 x 28 cm (softcover)
272 pages (ill.)
24.00 €
ISBN : 978-3-95679-630-2
EAN : 9783956796302
forthcoming