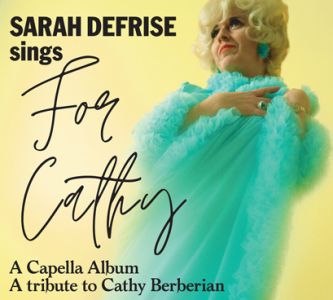 order
wishlist
Sarah Defrise dedicates her first new music album to the American mezzo-soprano Cathy Berberian, featuring exclusively a capella pieces which were written for Berberian by some of the most prominent composers of her time.
Berio's Sequenza III, Cage's Aria and Berberian's own Stripsody have become new music "hits", but For Cathy also presents lesser known repertoire such as Henri Pousseur's Phonème pour Cathy, Bussoti's fragment from Passion selon Sade and Entretien, a piece for electronic tape composed by Sarah Defrise as a tribute to Berberian.
Sarah Defrise took an active part in the editing process of the disk in order to create a coherent sound object, displaying the endless possibilities of the human voice.
Cathy Berberian (1925-1983) was an American mezzo-soprano and composer based in Italy. She worked closely with many contemporary avant-garde music composers, including Luciano Berio, Bruno Maderna, John Cage, Henri Pousseur, Sylvano Bussotti, Darius Milhaud, Roman Haubenstock-Ramati and Igor Stravinsky. As a recital curator, she presented several vocal genres in a classical context, including arrangements of songs by The Beatles as well as folk songs from several countries and cultures. As a composer, she wrote Stripsody (1966), in which she exploits her vocal technique using comic book sounds (onomatopoeia), and Morsicat(h)y (1969), a composition for the keyboard (with the right hand only) based on Morse Code.
Belgian soprano Sarah Defrise has quickly established herself as one of the most fascinating young vocal artists enjoying close working relationships with a wide range of contemporary composers. A polymorphic artist, she is at ease in Lied, opera as well as contemporary performances including solo stand-up shows. She featured as a soloist on stages such as the Berlin Staatsoper, the Grand Théâtre de Genève, MÜPA in Budapest, NOF in Fribourg, the Opéra royal de Wallonie in Liège and la Monnaie / De Munt in Brussels. Composers Peter Eötvös and Jean-Luc Fafchamps have conceived roles specifically for her.
Sarah Defrise holds a Master in Music from the Koninklijk Conservatorium Brussel and a PhD in the Arts from the Vrije Universitijt Brussel. She won several international prizes and scholarships.
order wishlist
published in November 2021
15.00 €
EAN : 5411867115250
in stock