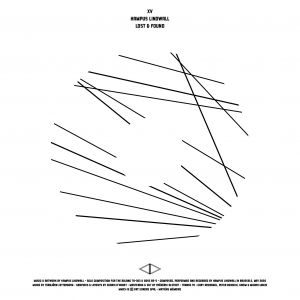 order
wishlist
With touchstones in electronic dance music, and forward-thinking, synthesizer based abstraction, Hampus Lindwall’s contribution to Matière Mémoire's MMXX Series weaves a singularly striking world of pulsing, organized sound.
This record is part of the MMXX Series. In anticipation of the year 2020, Matière Mémoire asked 20 experimental/electronic artists to create an original 20 minutes piece and an artwork. Each record is limited to 500 copies and comes as a crystal clear vinyl featuring an original track of 20 minutes on one side, and a laser engraved artwork on the other. Each 12" is housed in a transparent sleeve printed with the MMXX logo, coming with a print of the artist artwork.

Hampus Lindwall is a musical artist who is praised as an organ performer of contemporary and 20th century music and as a creative improviser & composer. He was the last disciple of Rolande Falcinelli and is the Titular Organist in Saint-Esprit, Paris, a position made famous by Jeanne Demessieux who occupied it between 1933 and 1962.
Hampus Lindwall gives concerts throughout Europe, in the U.S.A., Canada and China. He is doing numerous collaborations and first performances with composers and artists like Cory Arcangel, Noriko Baba, Raphaël Cendo, John Duncan, Leif Elggren, Mauro Lanza, Jesper Nordin, Studio For Propositional Cinema, Emily Sundblad and others. He has released albums with Ligia Digital, Clean Feed Records, Firework Editions and Matière Mémoire.
Born (1976) in Stockholm, Hampus Lindwall grew up playing the electric guitar in various rock, metal & jazz bands. He started playing keyboards in his late teens and studied the organ at the Royal College of Music in Stockholm. Under the influence of Rolande Falcinelli he moved to Paris in 2002 and studied at the Conservatoire de Saint-Maur-des-Fossés and the Conservatoire National Supérieur de Musique in Lyon. He won the 1st prizes in the International improvisation competitions "Orgel ohne Grenzen, Air Art 2003″ in Saarbrücken, Germany, and the "Prix Boëllmann-Gigout", 2004 in Strasbourg, France.
order wishlist
published in January 2021
clear vinyl with etched B-side
25.00 €
in stock