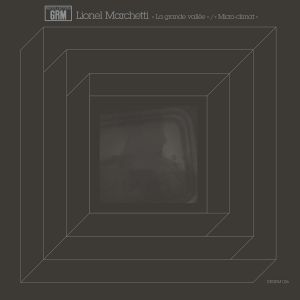 pre-order
wishlist
Two essentiel works of musique concrète commissioned for and and realised at the GRM by Lionel Marchetti during the mid ‘90s.
“Lionel Marchetti is a major figure of the ‘third generation’ of concrète musicians, a term he values. Listening to these works, imbued with poetry and traversed by micro-narratives, one can indeed retrieve the original concrète spirit, the one that draws from the sonic world, with ears wide open, so as to extract a fertile, rich and multiple substance then shaped and conveyed towards a formal and musical abstraction. Lionel Marchetti has mastered this process, but his real distinctive feature is a truly unique talent for setting climates (as one sets traps) and keeping us on constant alert. The two pieces in this record perfectly illustrate the entrancing dimension of Lionel Marchetti's music, whose charm leads us, through each successive listening, to become voluntary captives so as to better liberate ourselves.”
—François Bonnet, Paris, 2020

“I wonder if my fascination for clouds (without being an obsession) may have risen at the end of the 80s as, whilst composing Micro-climat, I would regularly wander between the Vercors mountains and the high plateaus of the Monts du Forez discovering, through my eyes, body, breath, active observation and walk, that natural forms when constantly changing and yet swollen with a unity of matter (in this instance, water) open one up to a deep, fundamental breath and a clear field for the mind. The sky and its forces: our ally. A model for a natural music which, although fixed, as in musique concrète (a rule of the genre), moreover on a recording tape, will remain charged with such a poetic quality that (isn't it its role or rather its reality?) it will ensure a perpetual renewal for our senses, so as to reach another idea of the world, far more open and richer than what we could have imagined.”
—Lionel Marchetti, 2011

https://lionelmarchetti.bandcamp.com/album/la-grande-vall-e-micro-climat
Lionel Marchetti is a French composer of concrete music and improviser (electronics, various analogic systems with modified speakers, REVOX reel-to-reel recorder…) as well as a visual-sound artist, a writer and a poet. Whether his music is composed or improvised the body has an important role (Lionel Marchetti danced with the university company Relyanse between 1986 and 1991).
pre-order wishlist
Mastered by Giuseppe Ielasi.
Cut by Andreas Kauffelt at Schnittstelle, Berlin.