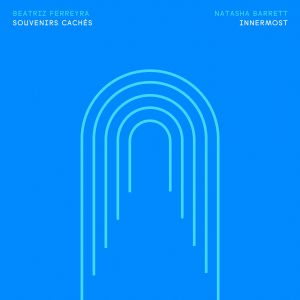 order
wishlist
A split LP from two leading voices in electroacoustic music.
Beatriz Ferreyra and Natasha Barrett are known for their intense exploration of the movement of sounds through space. Ferreyra has been at the cutting edge of developments in acousmatic music and sound morphology since she joined Pierre Schaeffer's small team of researchers in his tape experiments at the GRM Paris studios in 1963. Barrett has established an international reputation as a composer of 3D audio and ambisonics.
Following her 2019 album, Huellas Entreveradas, Beatriz Ferreyra returns with her major new work, Souvenirs Cachés (2021), a free journey through a distinctive mix of Ferreyran sounds, a carousel of disembodied vocal sounds, growls and susurrations, sprinkled across the stereo image, and joined intermittently by sustained drones or ethereal, melodic whines, with a hint of prepared piano. Hernan Gomez's percussive and manipulated flute is featured throughout.
Natasha Barrett's Innermost (2019) was first composed with natural but abstracted recordings from two outdoor Norwegian events. These were mass community celebrations, particular to Norwegian culture and devoid of political anxiety, although some of the electronically-treated, disembodied vocals seem to express elements of angst or anger. The interplay of manipulated vocal sounds and marching band samples contextualises the music in the open acoustics of a public event. Barrett describes the second section as an example of her notion of 'spatial counterpoint,' where many layers of minimal pitched sounds linger, intersect and interact.
The record also features Ferreyra's Murmureln (2003), commissioned as a danceable electroacoustic piece. Ferreyra's Argentinian roots are explored in a playful rendition of an old Comparsita, made from collaged vocal sounds and sampled fragments of tango musicians Astor Piazzola, Anibal Troilo, Susana Rinaldi and Roberto Goyeneche.
Download code included.
Beatriz Ferreyra (born 1937 in Cordoba, Argentina) has been at the forefront of electroacoustic music composition since 1963 when she joined the Groupe de Recherches Musicales as one of Pierre Schaeffer's research assistants. She is one of very few composers still performing who was instrumental at the beginning of Schaeffer's theories of sound objects and reduced listening techniques. She continues to compose commissioned works and perform around the world in a career that has spanned some sixty years.
From the 1960s until 1997 Beatriz Ferreyra composed tape pieces for multi-speaker performance using three or four Revox reel-to-reel tape machines at each concert. She now works on Pro Tools with GRM plug-ins but still uses the Revoxes for certain tape techniques that can't be achieved with computer software. Beatriz Ferreyra discusses her music in the Schaefferian way, as a series of impulsions [sharp attacks], iteratives [repetitions], percutés [percussive hits], and trames [sustains] whilst also using her own onomatopoeic descriptions such as ‘schkllang, prrrrwip, ferrrwisssssh, takatak' communicating sounds freely and directly as she hears them. Her music is about movement; the movement of sounds around a performance space, or the positioning of sounds as point sources within the illusory stereo field between loudspeakers. It is also about movement within individual sounds, where each one is a composition of different shifting components and a ‘little structure' in its own right, with its own character. She likens her sounds to a Russian doll, inside each is another one, which contains another, and so on.
During her time at Schaeffer's studios, Beatriz Ferreyra developed her own research project, Objets Construits, (constructed objects). These are layers of short sounds, chords made of different noises. Each layer is isolated on a separate piece of tape to analyse the relationships between components and the effect of minimal alterations in pitch, dynamics or timing, to the overall perception of the chord. This was a way of thinking about sound slowly and patiently, of taking time to experiment, analyse and contemplate each manipulation, that is lost in the speedy world of vast ready-made digital sound libraries and the immediacy of save and recall buttons.
In Beatriz Ferreyra's work, small, playful sounds interact like chattering creatures and merge into vast cavernous and mysterious immersive landscapes. These three signature pieces use snippets of speech which are gradually deconstructed to create abstract textures, interweaving vocals with percussive and sustained sounds. Small, playful sounds interact like chattering creatures and merge into vast cavernous and mysterious immersive landscapes. La Baballe du Chien Chien [The doggie's little ball] (2001) is a playful take on the way that we speak in a childlike way to pets. A brief narrative at the start invites the listener into this ‘pet speak' scene, with the sound of footsteps and chatter. These gradually crescendo and morph into a cacophonous swirling explosion. Deux Dents Dehors [two teeth sticking out] (2007) is a pun on Bernard Parmegiani's piece Dedans Dehors [Inside Outside] (1977), composed for his birthday. It takes snippets of lively vernacular and processes these into complex patterns of unintelligible and unrecognisable speech, in sustained or percussive sequences and glissandi. Heullas Entreveradas (2018) is a new commission that transforms vocal sounds into choral textures which fragment, granulate and transform into continuous whorls and tidal washes interspersed with her trademark short silences.
Natasha Barrett (born 1972 in Norwich, England, lives and works in Oslo, Norway) is a British electroacoustic music composer. She describes her inspiration as coming from the immediate sounding matter of the world around us, as well as the way it behaves. “I'm really concerned with the idea of tangibility. Sound is invisible, but we can do things that make you want to reach out and touch it.” Barrett's works are performed and commissioned throughout the world, and have received a long list of prizes, including the Giga-Hertz Award and the Bourges International Electroacoustic Music Awards.
order wishlist
published in April 2021
25.00 €
in stock