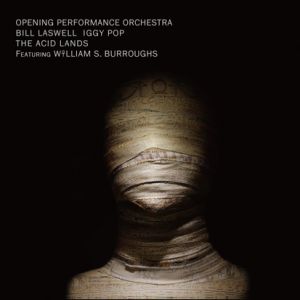 order
wishlist
A tribute to William S. Burroughs.
The Acid Lands, created by the Prague-based Opening Performance Orchestra, was first heard in public in 2014 at the Movement-Sound-Space festival in Ostrava, to mark the centenary of William S. Burroughs's birth. The piece was performed live by Opening Performance Orchestra and their guests, the theremin player Martina Potucková, and the poet, musician and performer Pavel Z as the narrator. The studio version of The Acid Lands was made in late 2019/early 2020 in collaboration with Bill Laswell and Iggy Pop, who undertook the role of the narrator. The piece, which pays tribute to William S. Burroughs, features fragments from the novels The Western Lands and Junkie. In addition to the title composition, The Acid Lands, the record contains Bill Laswell's instrumental remix, as well as the collective piece Naming Seven Souls, featuring samples of William S. Burroughs reading his own work.
Also available on vinyl.
Opening Performance Orchestra is a seven-member ensemble encompassing a wide genre span—from the 20th-century electronic thrusts of the musical avant-garde as far as contemporary Japanese noise music. Its own creations are based on fraction music, with the initial sound being digitally destroyed, fractured, and uncompromisingly rid of all its original attributes within the spirit of the credo “no melodies – no rhythms – no harmonies”. The results are original compositions (such as Spring Ceremony or Fraction Music, Evenfall, Creeping Waves) as well as reinterpretations of other composers' pieces that the ensemble feels to be in the same vein—cases in point being Inspirium Primum, referring to the material by Hiroshi Hasegawa, a Japanese noise music representative; Re:Broken Music, based on the destroyed music of the Czech Fluxus artist Milan Knížák; Chess Show, a distinctive John Cage reminiscence; Perceived Horizons, a tribute to musique concrète; The Noise of Art and Futurist Soirée, originating from the ideas and texts of the Italian Futurists and bringing to bear authentic instruments known as intonarumori.
During its existence, Opening Performance Orchestra has given a number of concerts, for example, at MaerzMusic, a contemporary music festival in Berlin (2014, Broken Re:broken); at the New Music Exposition international festival in Brno (2014, Broken Re:broken); at the Minimarathon of electronic music held as a part of the Days of Ostrava festival of contemporary music (2013, The Noise Of Art); at the Next festival of progressive music in Bratislava (2014, Fraction Music VII); at the Prague Industrial Festival (2006, Fraction Music, and 2008, Astropo); at the Wroclaw Industrial Festival (2007, Fraction Music II); at several previews of the Czech Concretists' Club, including a retrospective at Topièùv salon in Prague (2015, The Contours of Sounds); at the opening of the Membra Disjecta for John Cage exhibition at the DOX gallery in Prague (2012, Chess Show); at the National Gallery in Prague during the Art's Birthday party given by Czech Radio (2016, Futurist Soirée); and at Ostrava Days, in co-operation with Reinhold Friedl (2017, Chess Show).
Since 2010, Opening Performance Orchestra has regularly organised Noise Zone, an open audio-visual project mapping the noise scene, which has hosted, among others, Hiroshi Hasegawa, Astro, Merzbow, Schloss Tegal, Einleitungszeit, Birds Build Nests Underground, Instinct Primal, Magadan, Napalmed and others.
Since 2006, Opening Performance Orchestra has released CDs, mostly as self-publishers, but also with the Belgian label Sub Rosa (Broken Re:broken, together with Milan Knížák, October 2015) and the German label Psych KG (Fraction Elements, together with Hiroshi Hasegawa, August 2016). At the beginning of 2016, Opening Performance Orchestra recorded the composition Futurist Soirée, commissioned by Czech Radio, which was performed within the EBU international exchange network in November 2016.
Over the course of some three decades, visionary bassist-producer Bill Laswell (born 1955 in Salem, Illinois) has been one of the most prolific and restlessly creative forces in contemporary music. A sound conceptualist who has always been a step ahead of the curve, he has put his inimitable stamp on nearly 3,000 recording projects by such artists as Mick Jagger, Yoko Ono, Iggy Pop, Laurie Anderson, Brian Eno, Bootsy Collins, Nine Inch Nails, Motorhead, Peter Gabriel, Blur, les Ramones, George Clinton, Pharaoh Sanders, le Dalaï Lama, Matisyahu, Angelique Kidjo, DJ Krush, RAMM:ΣLL:ZΣΣ, Sting, The Last Poets, Afrika Bambaataa, PiL, Julian Schnabel, Whitney Houston, Manu Dibango, Fela Kuti, Herbie Hancock, William Burroughs…
Iggy Pop (born James Newell Osterberg Jr. in 1947 in Muskegon, Michigan) is one of the most influential artists in rock history.
William S. Burroughs (1914-1997) was an American author and a key figure of the Beat Generation.
order wishlist
published in December 2020
15.00 €
EAN : 5411867115007
in stock