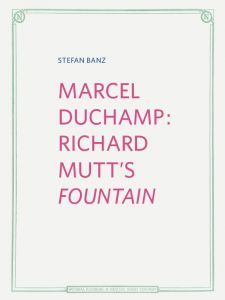 buy
wishlist
Stefan Banz has brought together and evaluated all the relevant documents and sources relating to Fountain by Richard Mutt alias Marcel Duchamp. At least one thing is certain after reading them: Elsa von Freytag-Loringhoven had definitively nothing to do with the creation of Fountain. In addition, Banz has succeeded in writing a highly inspiring book containing many new and revealing ideas that present this work of the century in a much more differentiated light.
Stefan Banz' new publication contains all relevant sources and documents that prove that everything Irene Gammel, Glyn Thompson and especially Siri Hustvedt have written about Fountain is fake news: Baroness Elsa von Freytag-Loringhoven has nothing to do with the creation of this work of the century. Curiously, Francis Naumann, America's best-known Duchamp specialist, unintentionally stood at the beginning of this fake news when he tried to enhance the Baroness's artistic work in his famous book New York Dada 1915–23 in 1994 (as a simultaneous art dealer of this epoch also a bit out of self-interest). For example, he attributed Morton L. Schamberg's Readymade God from 1917 (now in the collection of the Philadelphia Museum of Art), which in a way represents a reaction to Fountain, to Baroness as a co-author. And when Irene Gammel (who wrote the monograph on the artist) read this in 2001, it stimulated her to claim that the Baroness could possibly also be the author of Duchamp's Fountain (without actually having proof of it). And then the well-known writer Siri Hustvedt comes along and claims the same (again without evidence) and it happens, one fake news after the other, strews the Internet, almost all under the same sign. At the same time Fountain and Dada in New York are without any doubt one of Francis Naumann's greatest achievements in scientific research, and he certainly wouldn't have wanted his remarks to be a reason to start a false rumor.
In addition, this upcoming book also contains new, previously unknown evidence and documents on the origin, disappearance and reception of this famous readymade and also offers a new perspective on this most important work of the 20th century. The book, for example, takes a detailed look at Fountain's five different replicas from 1918, 1938, 1950, 1963 and 1964, because here, for the first time in history, the question of what authorship actually means and how it changes again and again – depending on preconditions or circumstances – is posed by artistic means. Authorship in itself is something very complex, it is never linear, and it is always more than just a spontaneous or creative idea for instance related to another artist's project. Duchamp's Readymade explicitly addresses all of this for the first time in history, and that's exactly what makes Fountain so extraordinary.
Duchamp's Readymade was also created in 1917 at a time when all sanitary products such as toilets, lavabos, showers and urinals were of unprecedented topicality. Everywhere in the US they wanted to improve hygiene, and so they began to install the latest sanitary facilities not only in private houses, but also in public buildings. In 1915, in Newark, there was even an exhibition of all these sanitary products in a museum (New Jersey was then the center of this industry), accompanied by a catalogue. The products were exhibited like works of art.
Stefan Banz (born in Sursee, lives and works in Switzerland) is an artist and author. In 1989 he cofounded the Kunsthalle Luzern and served as its artistic director until 1993; since then he has been working as a freelance artist, participating in solo and group exhibitions in international galleries and museums. From July 1994 to December 1997 he was the artistic consultant and curator of Galerie Hauser & Wirth. In 2000 he received the Manor Art Prize, and the Recognition Award from the City of Lucerne. From 2004 to 2014 he collaborated artistically with Caroline Bachmann. In 2005 he was the curator for the Swiss Pavilion at the 51st Biennale in Venice. In 2009 he cofounded the association , and in 2010 he co-organized the event “Marcel Duchamp and the Forestay Waterfall” in Cully, Switzerland, both with Caroline Bachmann. Since then he has been the artistic director of the KMD.
buy wishlist
published in July 2020
English edition
PDF
280 pages (88 ill.)
2.99 €
ISBN : 978-2-37896-188-6
EAN : 9782378961886
printed version available
table of contents