Caroline Bachmann (born 1963, Lausanne, lives and works in Cully and Berlin) grew up in Cully, Switzerland. She studied at the Academy of Arts and Crafts in Geneva, and leaved to live and work in Barcelona during four years. She moved then to Rome for eleven years, and, from 1997 until 2000, she took part in the Oreste project. In 2003 she came back to Switzerland, and since 2007, she is a professor in charge of the painting and drawing department at the University of Art, HEAD – Genève. She developed with Stefan Banz an artistic collaboration between 2004 and 2014. Their work can be seen in the permanent collections of The Philadelphia Museum of Art, Mamco, Geneva, and Kunstmuseum Wolfsburg, Germany. Since then they work again separately, but they still share together the KMD – Kunsthalle Marcel Duchamp | the Forestay Museum of Art, which they founded in 2009. 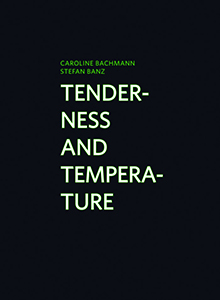 Stefan Banz, Caroline Bachmann
Tenderness and Temperature
2011
English edition
Kunsthalle Marcel Duchamp
Caroline Bachmann and Stefan Banz have designed a photographic and pictorial artist's book which focuses on Berlin cemeteries. In a combination of photography and painting they consider the uniqueness of the park-like cemeteries in Berlin, which are used as leisure and recreational areas. Bachmann and Banz turn these places of melancholy and calm into an aesthetic experience by “making emotions visible”.